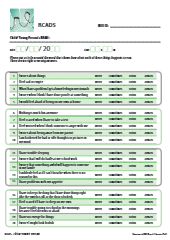 It also yields a Total Anxiety Scale (sum of the 5 anxiety subscales) and a Total Internalizing Scale (sum of all 6 subscales). Additionally, The Revised Child Anxiety and Depression Scale – Parent Version (RCADS-P) similarly assesses parent report of youth’s symptoms of anxiety and depression across the same six subscales.

The RCADS and the RCADS-P can be scored using spreadsheets or syntax available from the developer (link: https://www.childfirst.ucla.edu/resources/). The young person’s equivalent US School Grade must be entered, which is grade one below the UK school year. A “t-score” is calculated on these spreadsheets/syntax from a raw score (total score of the scale or subscale). The measures can also be scored manually following the instructions on the Scoring Aids for the RCADS and RCADS-P.

The ‘clinical thresholds’ for the overall score were established using the anxiety disorders interview schedule for DSM-IV, child and parent versions (ADIS-IV-C/P; Silverman & Albano, 1996) as a comparison (Chorpita et al., 2005). The thresholds for sub-scales are set using normative data.